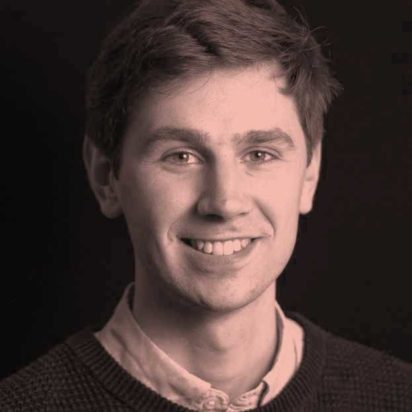 Almost everything that makes up the fabric of our everyday lives, from highways to skyscrapers and late-night pizza deliveries, was once a formless idea in the dark corners of a single person’s mind. It’s thinkers and dreamers who draw connections where none had previously noticed them, conjuring solutions to problems we didn’t know we had. They re-frame how we look at the world, and in the process, build it.

Wojciech Zasina, a product designer at DK&A’s studio in Wrocław, is one such person. He would be the first to say that most of his work is intangible, ensuring that apps work smoothly rather than clouding skylines with skyscrapers. A recent e-scooter project is a welcome opportunity to come back down to Earth, he says.

“There are disadvantages in the digital area in that when you build something you can only see it on a screen,” Wojciech says, explaining that the closest he’d gotten to working on something truly tangible was designing a data display for a drilling rig. That still only really existed on a screen though. “It’s not like wooden, it’s not solid, you cannot touch it.”

An App That Moves People

His new project still has him designing for the screen, but with very real-world consequences in mind. Wojciech designed and brought to life an app called Ride Hoop. A team spanning DK&A’s Helsinki, Wrocław, and Berlin offices developed the app in collaboration with Hoop, a new e-scooter company soon to launch services in Dubai and Helsinki. Wojciech worked on their scooter’s physical design and branding as well. 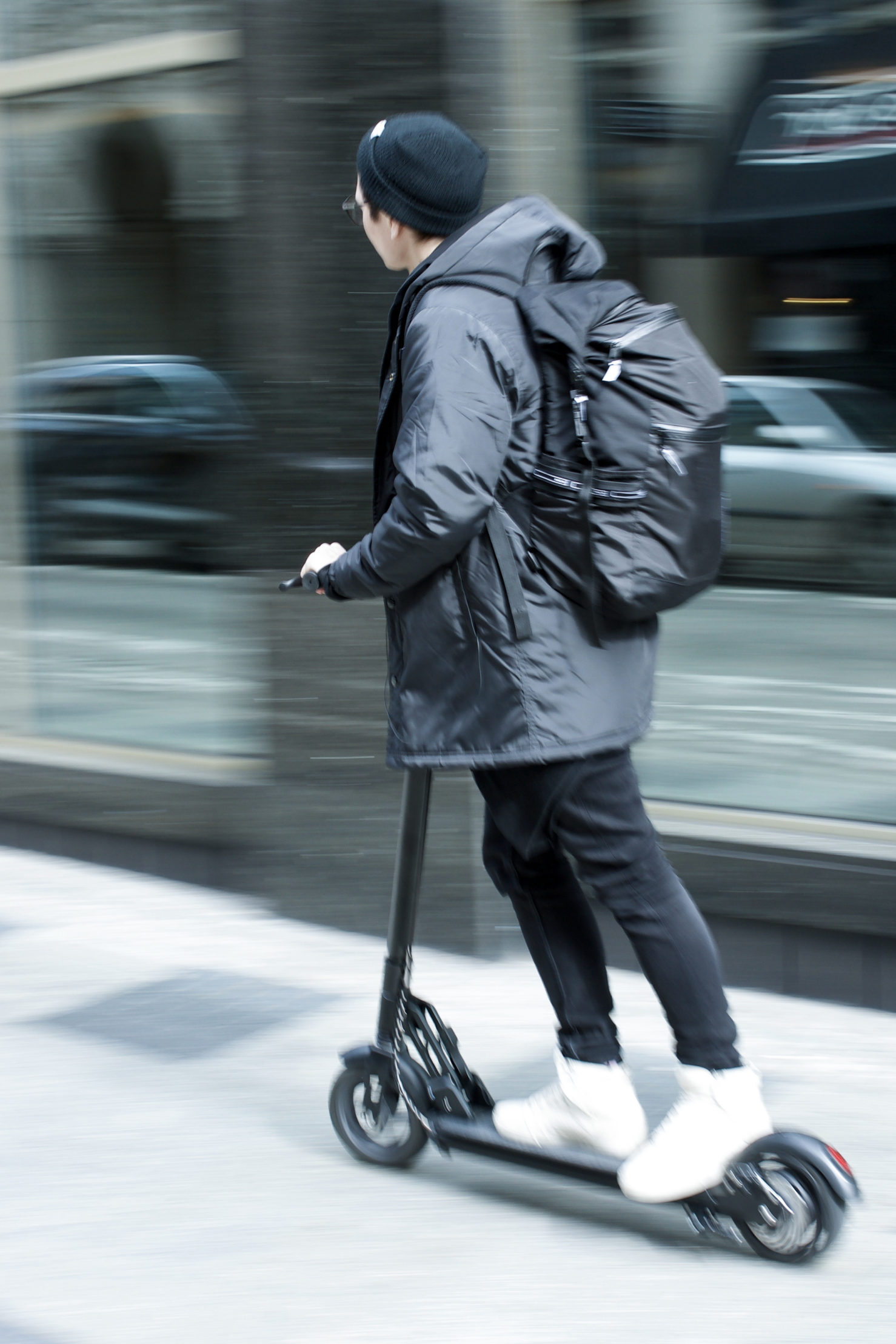 Seemingly out of nowhere, e-scooters have risen up over the past year to conquer cities across the developed world. From San Francisco to Moscow and Tokyo, enterprising companies have sprung up to provide cheap electric-powered scooters to those who, at the touch of a smartphone, want to take short spin.

“That’s something you can really use to move from one point in the city to another, and even if we’re not really producing the scooters, the application is something that communicates with it and that makes the entire service tangible,” Wojciech says, eyes gleaming. “It’s good to experience something real.”

E-scooters are a recent offshoot of our new information economy, but they’re real-world objects, after all. They transport living, breathing people. Hoop’s success then, depends almost entirely on people interacting smoothly with its app, and getting the machine to start. The more elegant and simple the presentation, the easier it is for the user.

Be they thinkers or dreamers, designers do not toil in ivory towers. Their imaginations are working toward a definite end. “We always need to find the comparison between the business and the user perspective,” Wojciech says, explaining that ease and simplicity have to battle with matter-of-fact concerns such as ensuring customers are shown a receipt (a tax necessity).

The challenge specific to Hoop, however, is deeper.

The e-scooter market is relatively new, but getting crowded quickly. It’s not hard to see why the products are a hit. For mere pennies, people can zip around town at their convenience using only their smartphone.

Yet for all their benefits, the arrival of e-scooters in bustling cities around the world hasn’t been without problems and tension. Or, in some cases, undisguised outrage.

Like with many products in the sharing economy, there’s nothing to stop people using a scooter and then discarding it wherever they please. Pavements and parks in commuter hotspots around the world can now be seen to be littered with e-scooters. This not only makes it hard to locate a scooter when you need one, but clogs precious public space and blights the urban landscape.

“It’s so cheap that people don’t really respect these devices,” says Wojciech. “You are not the owner, so you can do what you want with it.”

Ominously, the problem recalls some late bicycle-sharing schemes in several European cities. Greeted with great enthusiasm for their cheapness, easy availability and potential to wean commuters off polluting cars, many bike-sharing companies never figured out how to convince people to return the bikes. Treated as disposable, bikes piled up in hideous metallic heaps or were thrown in canals. Needless to say, these companies withdrew.

Hoop’s USP is built around avoiding this looming danger. It wants to ensure that its scooters are neither trash, nor perceived as such. And its solution is a time-honored one: Speak to people’s wallets.

Unlike rival companies, which charge users for unlocking the scooter as well as distance traveled, Hoop would allow free unlocking. However, alongside this, it would also create parking areas, known as “Hoop Stops,” in several parts of the city. If users return the scooter to a designated Hoop Stop, they would be charged a lower fee than if they left it elsewhere. This allows people to travel where they wish if the spot is far out of their way. Ultimately, however, it incentivizes responsibility toward the urban environment.

“It’s a similar idea to having car parks,” Wojciech says, which suggests that decades ago, planners and thinkers also had to design their way out of an automobile-storage problem.

If the whole concept sounds difficult to communicate to a hurried commuter in seconds — and in an app — it is. “That’s something we have a problem with,” Wojciech says, laughing, and adding that simply devising the working interface involved plenty of heavy lifting from developers and designers.

The concept comes alive in more subtle ways, however. After debating a flashy and fun purple branding, designers finally opted for the more serious black. (The purple lives on as a highlight color within the app). The idea is to connote a product less ‘throw-away’ than it is durable and reliable. Bright colors are for impermanent toys, dark ones for commuters who need to be on time for work.

The scooter, itself a blend of rich blacks and dark monochrome steel, is less flimsy to the touch than some others. “This one has a much more expensive build than the common scooter, because it’s more durable and a comfortable to use,” says Wojciech. It’s not something you would necessarily notice if you happened across a Hoop scooter on a street, he says, but you would if it were lined up against competitors.

“It’s something that you have to feel. It’s not easy to describe”  he adds, noting that the physical difference is not stark, but that the ride experience is noticeably smoother. The only big physical difference is the rechargeable electric battery, Michał says, which is placed under the footpad rather than stuck prominently onto the front bar, as in most electric scooters.

The harmony between doing right by the city and having a more grown-up appearance is no accident. “I think all these dots are connected,” says Wojciech. “It highlights the fact that we care about having an order in the city and it highlights also the quality of the scooter.”

The Man Behind The Curtain

Hundreds of man hours also went into ensuring that the scooters actually work when the time comes. Michał’s role involved nailing these background technical details — from ensuring that the app unlocks scooters to processing credit card details quickly and correctly. There is a touch of magic to the project for him as well. 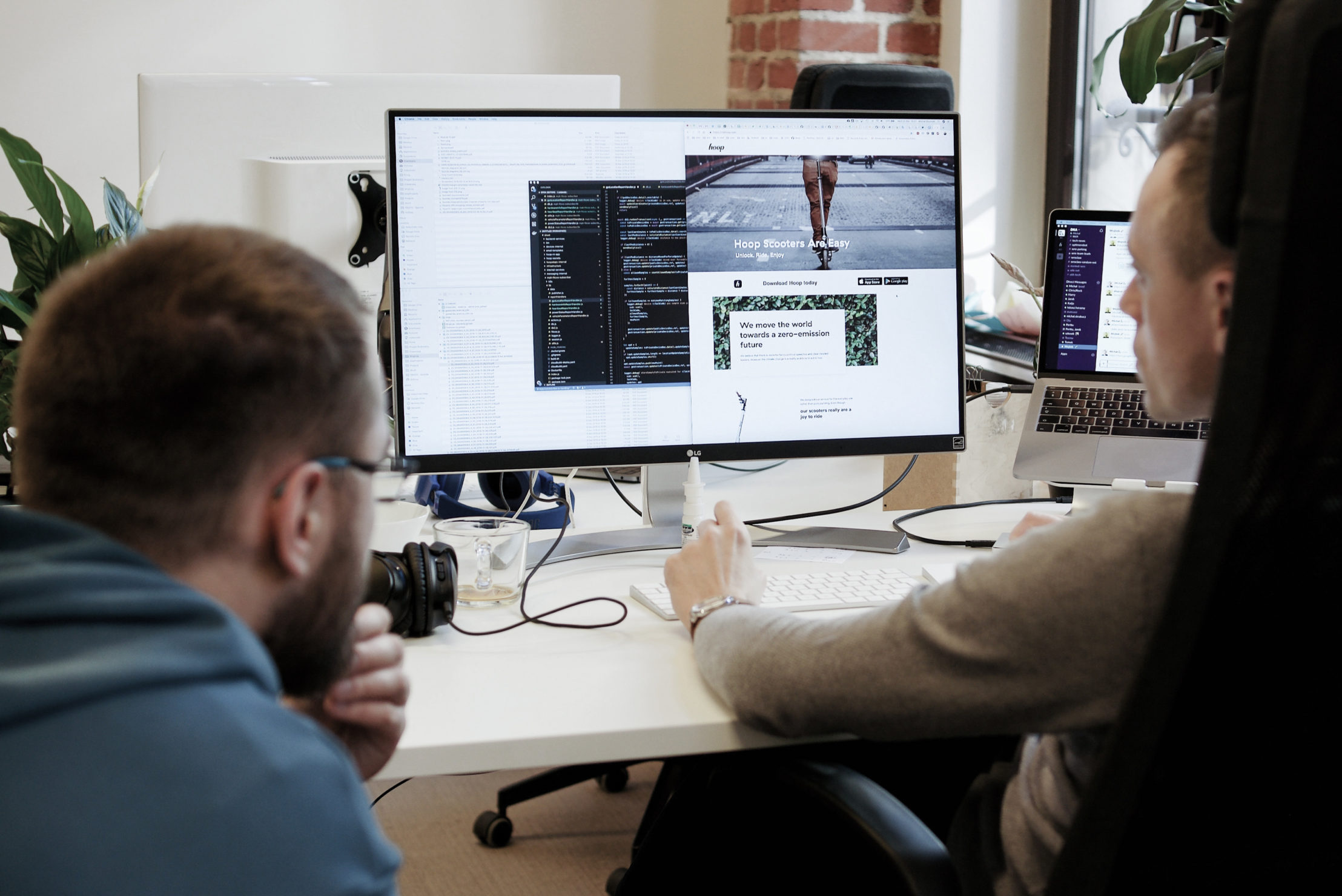 Wojciech Zasina and Michał Słociński working on the Hoop service a few days ahead of the launch.

It’s of a more otherworldly kind, however. Behind the scenes, engineers from DK&A and Hoop built software that communicates with any number of Hoop scooters all over the world, at the drop of a hat. This allows a program to command a scooter to emit a loud beep so that a user might find it at night time in a park, among other things.

“There’s a bunch of cloud servers constantly monitoring the environment. They basically know where each scooter is located and they are responsible for controlling them,” Michał says.

The software lives on the cloud, and contrary to older technologies that would require setting aside individual servers for the purpose, Hoop’s can stretch elastically to accommodate an infinite number of demands. “It is globally available and scalable, and it can accept any number of users and any numbers of scooters,” Michał says, describing building the world-spanning system as one of the project’s more interesting challenges. “Right now they have a limited number of scooters, but if they want another 1,000 or 100,000, this solution is ready to support that.”

“The cloud automatically monitors itself and it’s self healing,” he adds, explaining how the system is bullet proof.

For all the seeming invincibility of the system, there’s still work to do, according to both Wojciech and Michał. No matter how ready the system seems teething problems will emerge and designers and engineers will need to sit down again once the scooters are beneath people’s feet, zooming them to work.

“I believe that we’ll learn something about this business once it starts working,” Wojciech tells me. “That’s the most important part of the design process,” he adds, explaining that firms need to get up and go — and start making money — before really sweating details in the app and branding.

“The most difficult part is to actually face all the problems. Any feedback we see, and problems we get, we need to correct them,” he says, admitting that the important job of getting e-scooter riders to park in Hoop Stops is a delicate balancing act that designers need to seriously consider. “We really have to do it wisely without messing up the entire user experience,” he says.

But that’s where the joy in the job lies. Constant tinkering and experimentation to create harmony out of a mess, and ultimately, make something real where it didn’t exist before.

In an era of overcrowding and rapid urbanization, highways, skyscrapers, and cars, once embodiments of national achievement, have lost their gloss. Today’s most promising wares are of the soft variety, for which mechanical feasibility is a non-issue and the only limitation is imagination. Cities once saw horses replaced by cars. Now, with the right app and a few bits per second, a car can be replaced by an electric scooter.

“The most satisfying part is the creativity,” says Wojciech. “That you can build something from nothing.”

Virgin Hyperloop One was an industry leader, but because they had worked in secret, most people were unaware of their successes.

“They had been quite hush-hush up to this point, so they needed to have a coming out of sorts,” says Ville Kolehmainen. That’s when they got in touch with DK&A.

It’s been raining. As night falls, the temperature plummets. Pooled water freezes into ice. At best, drivers are in for an unwelcome scare. At worst, a life-threatening crash.

Imagine that instead of driving blindly toward danger, that they could be warned of the hazard.

The first era of mobile telecommunications was marked by what can retrospectively be called feature phones — by former market leaders like Blackberry or Nokia. Then apps came onto the scene.

Android Automotive is poised to have the same impact on cars.